Abu Dhabi will play host to the final round of what has been a truly dramatic Formula 2 championship.

Oscar Piastri enjoys a commanding 51.5 point lead at the top of the drivers’ standings ahead of his nearest challenger Robert Shwartzman.

Shwartzman and Zhou both have an outside chance of winning the title. Although it would require a disastrous weekend for the championship leader to give them a realistic opportunity at taking the crown.

Shwartzman enjoyed a pair of podiums last time out in Jeddah proving his formidable pace in Sochi was not just a flash in the pan.

Piastri was on top form last time out taking pole position and two very impressive victories in Saudi Arabia. The Australian won Race 2 and the Feature Race for PREMA keeping up his blistering form from previous rounds.

The 20 year old has performed admirably over the past three years taking the championship in Formula Renault and FIA F3. He is now on the verge of yet another crown in F2 after driving to five wins so far this season and being ultra consistent in 2021.

The Australian has already secured a reserve role at Alpine F1 team for 2022 and a test in the Alpine A521.

Piastri will drive Alpine’s 2021 machine at the newly revamped Yas Marina circuit during the F1 rookie test shortly after the Abu Dhabi event.

The man from Melbourne will be driving alongside plenty of esteemed company during his test in Abu Dhabi.

2019 Formula 2 champion Nyck De Vries will have an outing for Mercedes whilst Ferrari Driver Academy member Shwartzman will drive the Haas VF-21.

The Abu Dhabi track has received a major redevelopment since F2’s last visit in 2019 with a number of vast alterations to the layout.

The circuit is now much faster than the previous iteration with blindingly fast turns overlooked by the stunning backdrop of Yas Island.

The old layout featured a clumsy chicane at Turns 5 and 6. This has been replaced by a straight before the hairpin which has been opened up to create more overtaking opportunities.

Yas Marina has seen the bulk of it’s changes in the second and third sectors. The triple chicane at Turns 11,12 and 13 has been transformed into a fast and flowing left hander which should challenge the car and it’s driver.

The final sector which was previously very slow and technical has been opened up for 2021. The double left hander of Turn 13 and 14 underneath the Yas hotel are now much quicker than before amongst the new third sector.

The final change to the Abu Dhabi layout is the penultimate turn at Turn 15. It is now ultra fast and should help to provide some pulsating action at the season finale.

F2 will also a change to the driver lineup for the final round of the campaign. British driver Jake Hughes is returning to the grid with HWA Racelab replacing Williams driver Academy member Logan Sargeant.

The season has been brilliant with all the usual drama and nail-biting racing that F2 usually provides.

Will Piastri take the F2 crown or will there be a late upset in proceedings for the Australian at the revamped Abu Dhabi circuit? 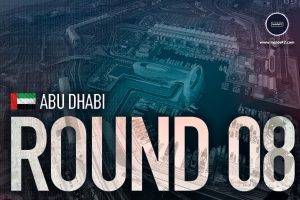