With just three rounds to go and a title race that is hotting up, Formula 2 heads for the second leg of its Italian tour at the Mugello circuit in rural Tuscany for round nine of the championship.

Set in lush green fields and just under an hour’s drive from the capital of the region Florence, Mugello will host the second tier of single-seater motorsport for the first time since 1997 when the series was called F3000 and where Ricardo Zonta became Brazil’s third F3000 champion after a controversial weekend which was decided in the steward’s room.

Mugello will be a step into the unknown with many of the teams making a visit with their Formula 2 cars with the circuit that is more well known for its motorcycling races rather than it’s car races potentially playing havoc with the stability of the Dallara F2/18.

The Mugello circuit is owned by Ferrari and has a combination of slow and fast corners along with an extremely long front straight before the drivers have to brake for the tight San Donato corner which starts a rollercoaster ride of a lap.

This weekend will be the first time since 2017 that one country will host two race weekends at two different venues with it also being the first round of the season that will include fans with Mugello letting in a small pocket of three thousand fans per day for the track’s first Grand Prix weekend.

The fans in attendance are to set to be in for a treat of a weekend as F2’s four-way title fight gets closer and closer with Callum Ilott, Mick Schumacher, Robert Shwartzman, and Yuki Tsunoda all separated by just twenty-six points with the top three only separated by nine points.

Last weekend at Monza saw the top four pulling further clear of although it was a tale of mixed fortunes.

Mick Schumacher came out of Monza as the big winner of the weekend with the German finally breaking his winless streak that had lasted just over one year and a day with a win in the Feature Race despite a crash in qualifying that put him seventh on the grid.

Schumacher’s lightning start had flashes of his father’s fast but controversial start in the 1994 French Grand Prix where Schumacher senior took the lead from start to finish from third on the grid whilst Schumacher junior went to second from seventh before leading after the pit stops.

However, it was the sprint race where Schumacher possibly earned himself the most credit after driving the final few laps of the sprint race with a vibration caused by out braking himself into the Rettifilo trying to old of Guanyu Zhou losing him ground on his way to third as fellow Ferrari junior Callum Ilott took the win and the championship lead.

Ilott however finished second on the road before getting a stroke of luck after Dan Ticktum was thrown out of the results for having not enough fuel in the tank for post-race testing giving Ilott his third win of the season.

It could have easily been the double for Ilott however if he not stalled at his mandatory pitstop which put him on the back foot and force him to charge through the pack to secure sixth.

Robert Shwartzman and Yuki Tsunoda left Monza as the big losers of the championship race with the Russian having a tough qualifying which left him eighteenth with the consequences being that he was stuck in the midfield for the majority of the Feature Race on his way to ninth.

Despite starting ninth Shwartzman worked his way through the field to finish sixth on the road before moving to fifth after Ticktum’s disqualification however the damage was done and Schwartzman’s ten-point championship lead had evaporated.

Tsunoda’s luck was even worse however as he lost more ground in the championship race with retirement in the Sprint Race due to a technical failure, with the gap not extending twenty-six points due to the Honda junior’s fourth in the Feature.

However, Tsunoda’s drive in the Feature Race included a hairy moment with Christian Lundgaard and Luca Ghiotto where the trio went three-wide into the Rettifilo very nearly ending in a bad shunt before Ghiotto went down the escape road on his way to second place.

All of this makes this weekend’s action at Mugello the most crucial of the season with team orders possibly coming into play, and the added intrigue of the drivers not in the championship hunt, as well as having nothing to lose playing a key role in the destiny of the championship.

Can Tsunoda claw back the gap? can Zhou help Ilott in disrupting the PREMA’s run at the top and will there be an eleventh different winner?

We’re about to find out. 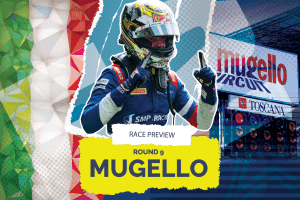