As the Formula 1 season packed away for what has been an astonishing year. We had one last run out to review inthe “Young driver test” at the Yas Marina Circuit, Abu Dhabi.

Following on from their FIA Formula 2 seasons both Jack Aitken and Roy Nissany continued to build on their F1 mileage in 2020 with one last F1 joy-ride.

“After a tricky season, it was good to finish with a productive and smooth day. Both Jack and Roy have driven the car several times this year, but for both to get a chance to have the car for a full day in the calm environment of a Young Driver Day was very valuable for everyone.

Conditions can be a little different during the Abu Dhabi day than in the afternoon and evening sessions at the race weekend, but nonetheless, it was good, valuable and representative running. Both drivers did an excellent job, enjoyed themselves and gained some very useful experience, which will help them to make increasingly valuable contributions to the car development programmes. As well as giving an opportunity to our young drivers, it also gives us a chance to rotate some of the engineers and mechanics, which increases our overall experience level and helps us motivate and train people for the next steps in their careers. With the prospect of longer seasons in the years ahead, this additional training is vital.

Jack Aitken, of course had a full Grand Prix weekend at the Sakhir version of the Bahrain event a couple of weeks ago. This was a top up on his FP1 session earlier in the year.

The British/Korean driver should now be really familiar with the modern F1 cars and the Williams in particular as he looks to decide on his 2021 options and what options could be available for him in 2022.

“It was a really good day, and I had lots of fun, but I wish we had more tyres to play with! We got through a nice programme, I got plenty of laps and we had no major issues which is always nice. There were a few things that we went into more detail with that we didn’t have time to in Bahrain. It was nice to go through some of the procedures and really knuckle down in more detail on some things which is a luxury. It was a nice way to end the year and thanks again to Williams for the opportunity.”

What a way to cap off the year, a super smooth test around a track with more than 4 corners ??? The laptime wasn’t even half bad, just one tenth off the boys in Quali ?? Massive thanks to @WilliamsRacing for pushing through on the last day of school! pic.twitter.com/We8FfAHy7z

In the other Williams we got to see Roy Nissany also continue his milage for the team which he has gathered through two separate FP1 sessions in 2020.

“It is always nice to jump back in the car and today was amazing. In contrast to the FP1s, it was a full day with lots of kilometres logged, lots of learning, lots of understanding of the car – a great experience. It was also a challenge in terms of the development, and in terms of understanding a few mechanical changes. Overall, I am happy with my performance, and I think the team is as well. It was a great way to end the year. I will take all the conclusions, go deep into the data and spend the winter analysing it all.”

Both drivers will no doubt have been smiling all day as the pumped in the laps around the Yas Marina Circuit today, not only because they got to live out a dream but also because they could literally taste the well earnt off season Pina-Coladas after a fast paced season.

Enjoy your time off boys! 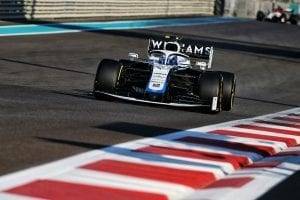