Williams Made the Most of Silverstone Weekend in Tricky Conditions

Williams Made the Most of Silverstone Weekend in Tricky Conditions

FIA Formula 2 driver, Calan Williams, made the most of his weekend at Silverstone in tricky conditions, amongst a tough qualifying session on Friday, and part-wet race on Saturday.

“Qualifying was quite tough yesterday for a few different reasons, but it’s something to learn from, and it’s something that I need to make the most of this weekend, see what I can do in the races, moving through the field.”

Qualifying in 21st place on Friday, would mean an uphill battle in both sprint and feature races. The Australian clawed back four places to finish P17 on Saturday, that saw a rolling start because of wet track conditions. Without a compulsory pit-stop in the Sprint Race, the drivers were struggling with overheating wet tyres as the circuit dried out.

“It was quite tricky the conditions actually. It was almost a bit easier in the start of the race where the track was more wet because these tyres degrade so quickly when the track starts to dry. We had the blocks on the rear tyres completely worn away on almost every car. It’s incredible. That’s what the main challenge of this race was, managing the rear tyres. It was almost impossible to manage the rear tyres, but working with what you had.”

If the tyres were degrading that quickly, and affecting lap times, Williams considered the possible advantage of pitting for a new set of tyres, in the shorter Sprint:

“In terms of the regulations you definitely can [pit during a Sprint Race to change tyres.] If there was a Safety Car or Virtual safety Car, depending on your situation, I’m sure we would have seen people come in the pits because the degradation was that bad.

The Trident driver looked ahead to the Feature Race the following day:

“I think tomorrow is going to present some good opportunities with the strategy in the Feature Race, and how that plays out. So, yeah, looking forward to it.

“The plan is going to be trying to make the most of what we have. We definitely had a much less than ideal qualifying, and that situation does make it a bit tricky. But in the Feature Race with the strategy and the endless amount of possibilities of what could happen during the race we’re going to work out the strategy that gives us the best opportunity to make a jump, given all the unpredictable things that could happen.“

Williams finished in 16th place in Sunday’s Feature Race. Not the ambitions for himself or the team, but each weekend presents opportunity to learn and grow as a driver and team.

In Jeddah, Williams, was close to his first Formula 2 podium with a P4 finish. And between himself and his teammate, Richard Verschoor, who won the first race of the season in Bahrain, and took a second place in Jeddah, Trident currently sit in ninth place in the Teams’ Championship, with 47 points. 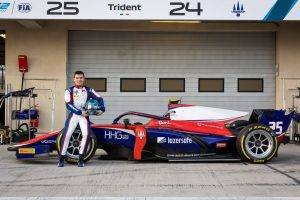