Both Formula 2 drivers had their much awaited F1 run out today at the Young Driver Test in Abu Dhabi.

Over the course of 250 Laps around the Yas Marina Circuit, Yuki Tsunoda’s Best time was a 1:37.557 which really highlighted his pace vs his partner Marino Sato. Sato himself set an overall fastest lap of 1:38.495.

Marino Sato got his first ever F1 drive as he follows a challenging season in Formula 2 as a rookie. Todays lap time will set him up for the future, with the extensive lap time he could need to gain a super-licence in the future.

“First of all, thank you to everyone in Scuderia Alpha Tauri for the opportunity I had today to drive an F1 car for the very first time. We completed quite a lot of laps, it’s just a shame that I got stuck in bit of traffic for my run on the soft compound. It was looking good until then, but I can’t say I could fully give it all I had today. But still, the first day in a Formula 1 car was really enjoyable and a great experience, so I hope to come back to drive this car again soon.”

Hitting the century mark ? @SATO_MARiNO racks up ? laps in the AT01, and he’s not done yet ? #AlphaTauri #F1 #F1Testing pic.twitter.com/JeuWVLNJn0

All eyes, however, had been on the performances and times of Formula 2’s Rookie of 2020, Tsunoda.

Yuki has really impressed watchers through the season with some outstanding displays of pace. These undoubtedly earned him a mid-season session in Imola to make up his missing mileage he needed to gain a super-licence.

Following further good displays he collected the points and positions he needed to convert that F1 track time into a FIA super-licence and make it possible for him to be an F1 driver as soon as 2021.

“I had more track time today than when I tried a Formula 1 car for the first time in November and I must admit I feel a bit tired now at the end of the day. But it was a very enjoyable experience. When I last drove in Imola it was a 2018 car, so I was surprised at the increase in power and downforce from the current car. However, the experience from my drive in Imola was definitely a useful starting point for today. There were quite a few aspects that felt new to me and during the session I worked on dealing with these and continuously improving throughout the day. I learned a lot and have made progress with my driving. The off-season starts tomorrow, and I have a training programme planned to make sure I am always stronger and fitter, but I will also enjoy some days at home in Japan, to fully recharge batteries.”

This could well have been an audition for Yuki as he is tipped for the F1 seat of Daniil Kyvat. Franz Tost, the Team Principal at Alpha Tauri will now have some thinking to do as 2021 driver line ups are to be decided.

“It was a very successful test today. They could experience the preparation which is required for such an event, like the FIA jump test, which they both passed without problems, and they could learn what it means having to work with a lot more engineers than what they were used to. During the test we were not allowed to do set up changes, but they could certainly learn the car and compare different tyre compounds as we tested both Primes and Options.

“Yuki did a great job while giving us very good technical feedback, and his cooperation with the engineers has been really beneficial. Marino also did a solid job, he completed many laps, learning the car and how an F1 team works. Today we had a very fruitful test, a good end to a successful 2020 season. 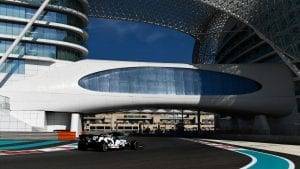