Yuki Tsunoda in England for too long

Yuki Tsunoda in England for too long

Japanese driver Yuki Tsunoda is gearing up for the first race of the season in FIA Formula 2 following a challenging period away from the circuit.

“I was in the UK since the test in Bahrain. It was a long time to be away from home, not so easy,” explains Tsunoda.

We have not seen him online much with some of his other counterparts so many fans and followers had wondered what the driver had been up too given he has a generally quite life on social media.

“Just training really almost every day with my trainer. With lockdown we couldn’t meet so we were doing it over video chat. Doing the physical training that I could here at my place and then I would do endurance training on my bike by myself.”

Talking about his lack of online sim racing he explained, “I have a bit of a sim here but it’s nothing special, not very realistic and though I tried doing some work on it I found it not so much use”. He continued, “œrecently I have done some time in the Red Bull Racing sim, working on the first circuits we will race on, the Red Bull Ring, Hungary, Barcelona and Silverstone. Also with Carlin we had a private test on track at Silverstone with some of the Formula One drivers.”

The Japanese driver clearly misses the on track action in what is set to be his debut in the F2 championship. The Carlin team performed well in testing and despite that being a few months ago it still stands true that they should expect to perform well this year.

“The Bahrain test was a good, very positive test data and from my side the driving went well also so I was very happy with that. I have good experience to take from that and we have used that and the data we got in discussions with the ream at the Carlin factory to prepare for this weekend.”

The Red Bull Ring will be seen as a home race for the driver in the junior ranks at the Austrian team; “The Red Bull Ring is a good track, a good mix of slow and fast corners. I just drove there once last year in the Formula 3. Things didn’t go well in practice and qualifying but I think that the situation will be different this year. I’ll try to make a good start to the season this year.”

Like his team mate he will be adapting to a new car and new competition, this is often the make or break moment in many driver’s career. Yuki will hope to make his mark and at least show some positive performances if not challenging for a title.

Tsunoda said, “I like both the F3 and F2 car. For me a big difference with the F2 car is the carbon brakes, more stopping power and also more downforce. The car is more expensive, a higher technical level and closer to an F1 car. The F3 is a light car, quite quick in fast and slow corners. I think in the F2 the important thing is tyre management so we’ll see how I can adjust to that in the races.”

How do you think Yuki will do in his first year in Formula 2? Let us know on Twitter @F2inside 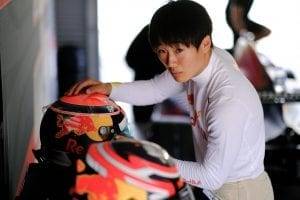