Zhou “Gave It Everything” for Front Row Start

Zhou “Gave It Everything” for Front Row Start

A heap of speed and a dash of luck proved to be a successful formula for FIA Formula 2 Championship leader Guanyu Zhou in Qualifying.

Sitting in seventh on the timing sheets following the first stints, the UNI-Virtuosi driver catapulted himself into second moments before the session was brought to a premature end by the red flag.

Despite missing out on pole to fellow Alpine Academy Junior Oscar Piastri and having his title lead cut to one point, Zhou was content to be back lining up on the Feature Race front row.

“Well, P2 after a bad few qualifying sessions I’m quite ok with the results even though we had good potential to fight with Oscar.

“I definitely didn’t think we had the potential to be fighting for pole after the first set, because after the first run I was eight tenths off, so I really had to do a huge lap to be able to get close to Oscar.”

Red flags proved to be a thorn in drivers’ sides once more as their limited session time was cut due to ART’s Théo Pourchaire incident in Practice.

However, unlike most drivers Zhou will have been thanking his lucky stars for Qualifying’s red-flagged ending.

“This morning I only had four flying laps because of all of red flags so you don’t get a lot of laps. So, it’s all about how confident you are throwing the car through Sector 2, especially though Maggots and Becketts there’s a high risk of spinning the car around, but it also where you can gain the most.

“To be honest I knew where I was in P7 I really had to give it everything I had in the car and in myself. That’s what was able to let me put almost everything together.”

With two minutes remaining in the session, PREMA’s Robert Shwartzman beached himself in the gravel at Stowe [Turn 15]. Fortunately for Zhou, a purple first sector and personal best in Sector 2 helped him cross the line by a whisker.

Nevertheless, he was left unfazed by the tight margins and remained confident that his time of 1:40.075 would not be deleted.

“I saw that there could be a red flag so all the way to the finish line I was checking my dash, also checking out the light panel.

“The moment I crossed the line and knew I was safe; I think probably one-and-a-half to two seconds afterwards it got red.

“So, I was probably a bit lucky on that side to be able to at least get a lap in on my second set as my first flying lap was getting blocked by another driver ahead.

“I was paying attention with the red flags, so I knew I crossed the line just before that, so I was thinking definitely I was safe.”

If Zhou did not think Silverstone was enough of a challenge already, track temperatures of 42 degrees seemed to cause havoc for him and others, as drivers struggled to get their tyres in the optimal window.

“It was really low grip out there today. I didn’t help that we had our session straight after these historic cars. They were spitting oil on track everywhere, so whilst we were there, there was all this white painted marks on track.

Lining up in ninth on the grid for Sprint Race 1, the Chinese driver knows that he is going to have to carefully balance the risk versus rewards as he attempts to move his way through the pack.

Having previously brought home two podiums for his British-based team at Silverstone, all eyes will be on the championship leader as he fights to retain his lead.

Will Zhou achieve victory on home soil for UNI-Virtuosi? 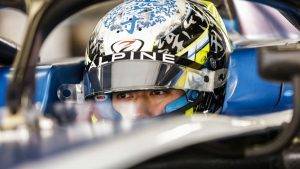