Looking virtually untouchable throughout the 29 lap race, the Chinese driver was happy to have ended an otherwise underwhelming Silverstone weekend on a positive note. His victory was made even sweeter as his family were able to watch him in action for the first time in two years.

“Yesterday was a day to put behind us but obviously today was a completely new day. The main focus was to try to win the race.

“After I got the lead in the start, I was controlling the race quite well, then we saw the guys behind start to struggle a little bit on the option tyres and after the pit stop, I knew my main competitor was Dan because he was the guy who was chasing up to me.

“So, I tried to follow the same pace as Dan [Ticktum] basically, but also driving my own race. Getting all the back markers was super difficult, DRS didn’t have too much effect on the back straight, so it made it a bit tricky.

“Nevertheless, all the way to the finish I was quite well in control and the car felt amazing.”

Zhou has gone from the hunted to the hunter after being forced to surrender his five point championship lead over fellow Alpine Academy Junior Oscar Piastri following his failure to score in both Sprint Races.

A retirement and an 11th-place finish in the two Sprint Races left him needing to do some serious damage limitation if he wanted to salvage something from the weekend.

Fortunately for him, UNI-Virtuosi were able to make some set-up changes that helped to give him the pace he needed to edge out his main rivals Piastri and Ticktum for the victory.

The story of his race was effectively written at the start, getting the jump on pole-sitter Piastri off the line. This was even more remarkable as both he and Ticktum in the Carlin have been forced to manage a change in start procedures following his issues in Baku.

Despite facing an uphill battle at lights out, Zhou was able to expertly manage his strategy and sail away with the win, something that was desperately needed to claw back any advantage his PREMA rival had in the championship.

“The plan coming into this season is to be a title contender. Now we’re P2, five points behind so have a good shot to get the championship.

“Obviously, the mistake I did on Saturday is not acceptable from my side and we made it up today.

“We have good chances of fighting for the title with several people together. But again, with this new format you have to be super consistent in getting all the points, you can’t afford any DNFs.”

With a two month break between Rounds 4 and 5, a time to reflect and reset could be ideal after a chequered championship campaign and Zhou knows that he will need to come back fighting when FIA Formula 2 returns to Monza in September.

Can Zhou regain the championship lead from Piastri? 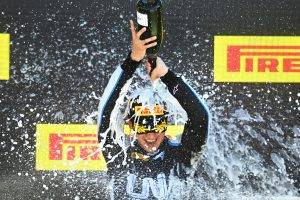