Zhou Leads a UNI-Virtuosi 1-2 in Monaco

Zhou Leads a UNI-Virtuosi 1-2 in Monaco

Guanyu Zhou wins in Monaco with FIA Formula 2 championship rivals Robert Shwartzman and Christian Lundgaard failing to finish. The Alpine Academy driver was joined by his teammate, Felipe Drugovich, and a jubilant Roy Nissany on the podium.

It was a lights to flag victory for Zhou who led into Turn 1 followed by third-place qualifier Lundgaard who got past Drugovich into Sainte-Dévote.

PREMA driver, Shwartzman, hit the wall on the outside of Casino Square where he damaged his front wing on Lap 1; a less than ideal start for the potential championship contender.

Despite making it back to the pit lane, Shwartzman retired on Lap 4. The Russian will sit at the back of the grid for Sprint Race 2. Luckily for him, he starts on the front row for the Feature Race since he qualified first in Group B on Thursday afternoon.

Despite challenging for the lead in the first few laps, Lundgaard dropped back on Lap 14 with smoke pouring from the back of his car. Devastatingly for the Dane, he retired on Lap 15 from a safe second place.

Carlin’s Dan Ticktum shared concerns that Lundgaard’s car may have been dropping oil on the circuit as he radioed his team to say he could smell some in the air.

Lundgaard will now join Shwartzman at the back of the grid for the second Sprint Race on Saturday morning.

Alessio Deledda was overtaken by the leader, Zhou on Lap 19. Deledda was permitted to race by the stewards, despite failing to meet the 107% rule in qualifying.

On Lap 25, Gianluca Petecof hit the wall at the second part of the Swimming Pool chicane.  The rookie’s weekend has already been tough with his dramatic engine failure during Free Practice. Petecof’s incident brought out the Safety Car, bunching the field together for the closing stages of the race.

Marino Sato also found the wall on Lap 28 at Sainte-Dévote. The car was rapidly recovered by the final lap without any further Safety Car requirement – Some great work from the marshals at Monaco!

In the last few corners of the race, Marcus Armstrong made an incredible move to provisionally take reverse grid pole for Sprint Race 2 away from Jehan Daruvala. Daruvala had sat in 10th throughout the race but now faces a P11 start for the final Sprint Race of the weekend.

There is the potential that Daruvala might reclaim pole position, however. Hitech’s Jüri Vips is under investigation by the stewards and any penalty he may receive could promote Daruvala back to 10th.

By the chequered flag, UNI-Virtuosi took a 1-2 at F2’s first Monaco event of the weekend, with Zhou ahead of Drugovich.

Those final few laps though! Were you also on the edge of your seat?

Tweet us and let us know your thoughts on this race or join the Discord to talk about the race with other Formula 2 fans! 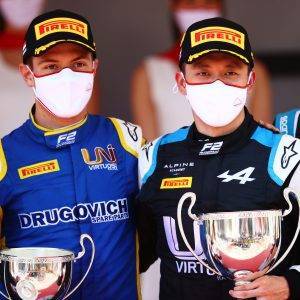