Guanyu Zhou scored his first win in F2 during the Sprint Race in Sochi, taking UNI-Virtuosi’s fourth of the season.

Zhou started from pole in the Sprint Race to give him the best chance for his first victory.

Despite the strong tow, the Chinese driver had a great start, keeping the lead while others squabbled for positions behind.

While in a commanding lead, and saving tyres for the end, a red flag came out on Lap 9. The repairs needed to the barriers meant Race Control chose not to restart the race, handing Zhou the victory.

Guanyu Zhou said: “It was something amazing [to take a first F2 win].

“We’ve had some struggle races, and this week starting on pole my target was to win the race, and I think we did everything right in the beginning, getting the nice gap and pulling away with Nikita [Mazepin] from the rest of the pack. I knew the fight for victory was with him more or less. It’s definitely amazing to have that victory; it’s been such a long, long time.

“It’s finally come around, and I think once you hit it for the first time there should be more coming and I’m definitely going to keep working hard, keep pushing, try to achieve more and more race wins, podiums for the next two races.”

Zhou’s teammate, Callum Ilott, scored a strong podium in the Feature Race to keep himself in contention for the Championship.

The Sprint Race saw Ilott hit at the start and running seventh when the red flag came out.

It still allowed the Ferrari Academy Driver to add a single point to his title push.

Callum Ilott said: “Race one, I didn’t get a good start at all, but the first stint was good and I managed to get back up to P3. I was held a little bit coming out of the pits, which meant I was under pressure on my out lap. I had to play catch-up a bit and used the tyres to catch the guys ahead, so I used the tyres a bit too much, and that’s when I was overtaken for second.

“It was a bit unfortunate at the end, but we did have good speed, just had to push a bit too hard on the tyres.

“In race two, we got a good start but made the wrong decision, I went to go down the left of Turn 2 at the start, and I should have gone to the right.

“I had contact in Turn 2, little bit of damage but it was manageable. It was a shame not to restart and get some of those positions, but it happens. Not a bad weekend and some good points.”

UNI-Virtuosi will return to action with two consecutive rounds in Bahrain in two months, still in with a chance of taking the constructors’ championship. 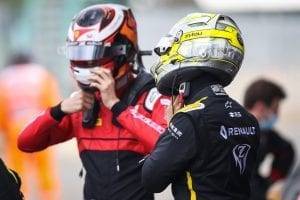