UNI-Virtuosi took an early lead in the drivers’ championship standings with a podium in Sprint Race two and a win in the Feature Race.

Zhou put in an impressive performance to take his first Feature Race win and UNI-Virtuosi’s first of the season. The Chinese driver showed his experience as he converted pole to the race win in Sunday’s Feature Race in Bahrain.

Zhou started on the hard tire but fell out of the top ten in the early laps, as those on softs gained the advantage. He then fought back, using a well-timed safety car to his advantage as he made his way through the field.

Meanwhile, Felipe Drugovich gave a good fight, but bad luck struck him once again. Despite initially battling for a podium, the Brazilian dropped down the order to ninth.

UNI-Virtuosi started the weekend by topping both Friday sessions. Drugovich sealed the practice session before qualifying third. At the same time, Zhou claimed the first pole of the year for the second season in a row.

Zhou drove a controlled race, finishing seventh, but Drugovich’s morning wasn’t as calm. Front-wing damage in the opening laps forced the Brazilian to pit. He returned to the track at the back of the pack but didn’t manage to make up 40 seconds and finish 16th.

The grid for Sprint Race two is determined by reversing the grid for the top ten in race one. This saw Zhou start fourth and Drugovich 16th.

Zhou once again put in a controlled race, finishing third, while Drugovich rode impressively nine positions by lap four. A late safety car thwarted the efforts, as drivers on new tires got ahead and dropped the Brazilian down to 14th.

Zhou said: “My first Feature Race win and a great comeback from yesterday. Amazing. Today was a bit messy, especially towards the end. I saw the safety car coming out and thought, ‘no, not again’.

“Richard (Verschoor) had a clean pit stop, and I had to do everything on track. It felt good to come through the field – congrats to the whole team; we fully deserved it.”

Round two will take place in Monaco from the 21st to the 23rd of May. 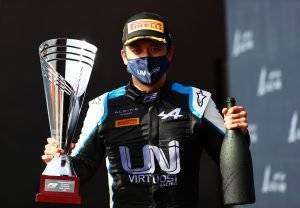