It’s been a busy couple of days for Renault and their young driver Guanyu Zhou.

It’s F1 Test day in Budapest for @gyzhou_33. No rest for the RSA! #RSspirit pic.twitter.com/NUlmAzd5tS

With Zhou aiming to be the first Chinese racer in F1 the two days in the R.S.18. is good preparation for him and a chance to prove himself in the car.

The test is part of Zhou’s role as within the Renault Formula 1 team as their test driver, a position he took on alongside his Formula 2 racing with UNI-Virtuosi.

He currently sits in eighth in the standings with three podiums to his name. Zhou is yet to claim a victory in F2 despite two career pole positions.

The Budapest test was his first in 2020, with him having tested with the Chinese driver having tested at the Red Bull Ring, Barcelona, Budapest, Paul Ricard, and Jerez in the past.

On the first day of the test, Zhou did around 450km while the second day saw him add another 520km to the total.

Zhou took to social media to show how happy he was posting on twitter: “I LOVE FAST CARS. Good to be back”.

I LOVE FAST CARS. #F1
? Good to be back
Merci @renaultf1team ?? pic.twitter.com/Jt7CZ6pcAc

The Instagram post saw fellow Renault Sport Academy driver Christian Lundgaard comment with: “Where was my invite bro?” to which Zhou joked: “Where’s our private jet, get a jet we go together”.

Zhou returns to his usual Formula 2 car in Sochi in a about a week when Formula 2 returns for more action and thrill in the run to crown the champion. 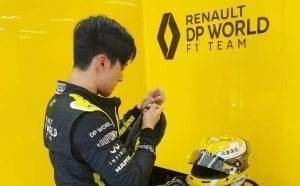