Guanyu Zhou lined up on pole position for the Feature Race ahead of fellow Alpine Academy driver Christian Lundgaard.

At the start, Lundgaard led into Turn 1 snatching first position from pole sitter Zhou. Further round the first lap Zhou fought back against Lundgaard but couldn’t make a move stick and thus lost the place to Felipe Drugovich.

After all of that drama the Safety Car was brought out neutralising the race.

The Safety Car came in on Lap 3 and Lundgaard led the field after some terrific racing with Drugovich through the first sector of the Bahrain International Circuit.

Championship leader Oscar Piastri also produced a stunning move to take third place from Chinese driver Zhou, sneaking up the inside at Turn 10.

Shwartzman picked up a drive-through penalty for his first lap incident with Nissany, dropping him to the back of the field.

As the Feature Race settled down, race leader Lundgaard began to take control setting good lap times on the soft tyre. Piastri produced yet another great move, this time on Drugovich at Turn 1, the Australian moved up to second.

While the race progressed, Piastri began to hunt down race leader Lundgaard and by Lap 9 Piastri found himself within a second of the race leader. Drugovich kept a watching brief in third position.

On Lap 13 Piastri made his move and roared past Lundgaard on the main straight, sweeping around the outside of the Danish driver at Turn 1.

That terrific move from the Australian triggered ART to bring in their driver Lundgaard for the slower but more durable hard tyre on Lap 14.

One lap later, Brazilian driver Drugovich also came into the pits for the hard tyre and eventually rejoined the race in a net third place behind Lundgaard.

On Lap 16, Zhou switched onto the soft tyres and looked to make the alternate strategy work. The Chinese driver rejoined just behind his teammate Drugovich.

Race leader Piastri pitted on Lap 16 and as he rejoined the track the Virtual Safety Car was deployed, this handed the Australian track position.

Marcus Armstrong also pitted under the Safety Car, a decision which proved to be a master stroke as it gave the Kiwi the race lead.

The Safety Car came in on Lap 18 and Piastri immediately made amends storming into the lead at Turn 1 with Richard Verschoor pushing Armstrong back into third place.

Verschoor began to attack Piastri and on Lap 20 the 2019 Macau Grand Prix winner launched a great move into Turn 1 using the extra grip of the soft tyre, taking the lead of the Formula 2 Feature Race.

On Lap 21 Drugovich and Lundgaard were both given 5 second time penalties for Safety Car infringements.

Lap 23, Zhou took second place from Piastri who began to struggle on his hard tyres.

5 laps later, Zhou produced a brilliant pass on Verschoor at Turn 4 taking the lead of the Feature Race as third place Piastri came under increasing pressure from Dan Ticktum.

The Virtual Safety Car was deployed.

At the restart, Ticktum produced a mega move to snatch second place from rookie Verschoor who struggled with his tyres at the end and dropped into fourth place.

Throughout all the drama Zhou took a brilliant victory from pole position, in typical Formula 2 style, ahead of Ticktum in P2 and Liam Lawson in third. 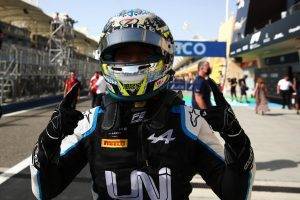