Guanyu Zhou has finally been announced as an Alfa Romeo F1 driver for 2022, after months of speculation surrounding the current runner-up in the FIA Formula 2 Championship.

The move is something that Zhou has “dreamt of from a young age… now the dream has come true.”

The UNI-Virtuosi driver’s move puts the final piece in the puzzle of the 2022 F1 grid, as he partners current Mercedes driver Valtteri Bottas at the Swiss outfit, replacing Antonio Giovinazzi.

“To be the first ever Chinese driver in Formula 1 is a breakthrough for Chinese motorsport history” said Zhou, as his move opens the Chinese market for Alfa Romeo and for Formula 1 as a business.

Zhou comes with significant financial backing, which could see the Italian-branded team reach their budget cap limit for 2022, with the funds involved in driving an F1 team’s development being all-important in the sport.

Although financial and commercial factors have certainly played a significant part in his move, no one can deny that he has demonstrated his talent particularly well this season in Formula 2, currently sitting second in the overall standings, with three race wins in 2021.

“He is a very talented driver, as his results in F2 have shown… we are proud of our line-up for 2022 and we are confident Zhou will form a very successful partnership with Valtteri. We are also looking forward to welcoming all the new Chinese fans who will join the team.”

Nearly half of the 2022 F1 grid will now be made up of F2 drivers from the last few years as Zhou joins eight other recent graduates.

His current team UNI-Virtuosi were among those to congratulate Zhou on his achievement:

“Congratulations, Joey. We are incredibly proud of you and we wish you the best of luck in Formula 1”

Securing the drive was a challenge, as very few Formula 1 seats ever seemed realistically up for grabs for 2022.  Zhou had to beat the likes of Oscar Piastri and Théo Pourchaire to the prize, which at one point looked like it could be claimed by Michael Andretti and Colton Herta.

Pourchaire will remain in F2 for a second season as he aims for an F1 seat in 2023, while Oscar Piastri has been announced as Alpine’s reserve driver as he continues his path in the French academy.

With a new homologation of F1 car for 2022, this will be a testing year of getting to grips with the all-new machinery as a rookie. On the other hand, every other driver will need to adjust to the new cars too, and Zhou will have the help of experienced team mate Bottas as a guide throughout the process.

Alpine were impressed by Zhou after his FP1 outing at Austria earlier this year, and his mature approach combined with his speed will be key ingredients to building a successful F1 career.

In the meantime, two rounds of the F2 championship still remain with 65 points on the table for a clean sweep at Jeddah and Abu Dhabi, as Zhou attempts to overhaul Piastri’s championship lead. 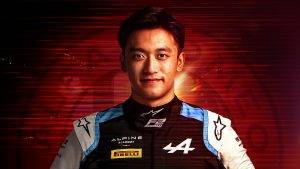