Starting P2 in the FIA Formula 2 Sprint Race in Jeddah, Jake Hughes had the best opportunity to get himself onto the podium by gambling on a soft tyre… He succeeded.

Getting bogged down on the Green Light, the Briton lost two places by the end of Lap 1:

“We had the same issue on the Feature Race start last week, which cost us dear.

“Being a new team we’re learning as we go. And, probably will continue to do a bit, and every time try not to make the same mistakes.“

The Van Amersfoort team took a chance on there being at least one Safety Car, with opting for the Pirelli soft compound. The team’s instincts were correct. Formula 2 sees its fair share of Safety Cars and today was no different.

After the second Safety Car restart, Hughes, used the softs to his advantage to overtake race leader, Calan Williams. Looking like this was the best strategy, the Van Amersfoort driver scampered off into the distance.

A quick Liam Lawson was hot on his trail, looking for his first race win of the season, to go with his 100% podium record in 2022. By Lap 18, Hughes’ tyres were dropping off and the New Zealander caught and passed him, with ease:

“When I got the lead I thought the tyres should last. I expected them to last longer than they did. It was surprising how quickly they would drop away. Once I realised Liam was in my DRS I knew I’d struggle. I knew once he was on my gear box, he’d cross the line ahead.”

In the closing stages of the Sprint Race, the Virtual Safety Car was deployed. On the restart, Estonian, Jüri Vips, appeared closer than he’d been. Hughes admitted there was an issue in communications that saw him fall away from Lawson’s gearbox, and into the clutches of Vips.

In a photo finish on the line, Vips, pipped Hughes to the post, to take P2:

“In hindsight, the tyre strategy was a bit aggressive, but as I said, in the end we learn from our mistakes this week, and if it happened again we might do something different.”

Torn between wanting to have finished higher, and being thrilled for his first podium in F2, Hughes admitted the result could have been worse:

“In some ways we’re a little bit fortunate with Safety Car interventions  Even just with one Safety Car, I think we would have really struggled and dropped back.”

Van Amersfoort are taking giant strides in the Formula 2 Championship, and making a respectable impact.

“F2 is a really difficult championship. There’s quite a lot of learning to perfect. We can see that once we get the car in the window we’re really quick. My job is to help the team do as well as possible.

“The race played out how it did, and we got a podium.” 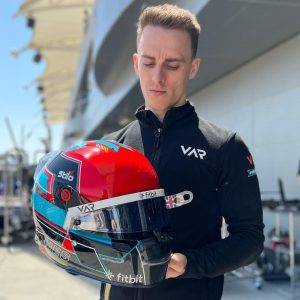